Alright it’s been over a month now so I guess I’m far overdue in telling everyone how Black Ops went. Now the race was long enough I feel like the review needs to be broken up into two pieces otherwise it’s going to be much too long. I’m also not going into too much depth as firstly of all you can look at the map I’ll provide to see the obstacles but secondly, I feel like it could drag on.

The adventure of Black Ops started the day before packing up the car and heading up to Edmonton to stay with my sister for the night to help cut down on the drive to Barrhead. After dinner and catching up I tried to stay up as late as possible to keep my body clock ready for the race (I go to bed around midnight everyday anyway) and that’s when the first curveball for the race happened. Watching the prerace video brief around 11:30 PM, I was surprised to find out that the loop was 8k. For the entire time I’ve been signed up for this race I had just assumed it would be a 5K loop as the distance awards of 25K, 50k and so on match up with something easily divisible by five. That instantly changed my plans for the way I was breaking up my running, nutrition and rest. Now it was a huge monkey wrench but none the less it was the first surprise. 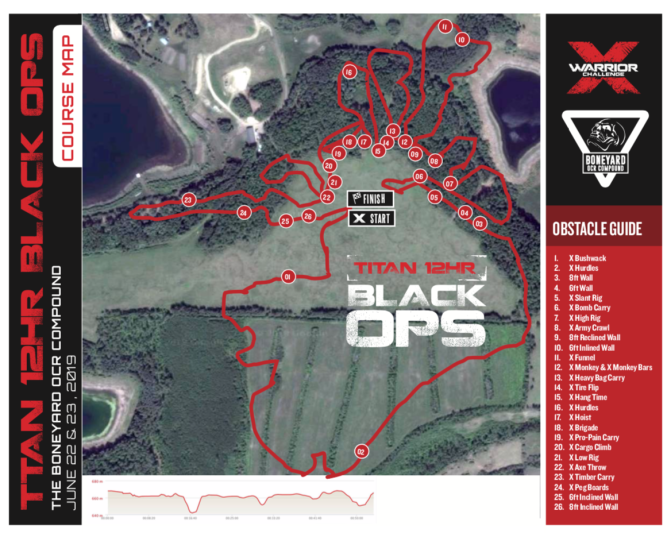 That night I didn’t sleep very well a combination of nerves, sounds of the inner city when you’re a fully adapted suburbanite now, and just a different pillow and bed set up added up for less than 5 hours of sleep.

The morning before the race I tried to take it easy and eat as much as I could knowing I was going to burn a lot of energy that night. The day was mostly lounging around talking with my sister and her boyfriend, with only a short walk to a nearby subway to break up the day. I headed up to Barrhead on pace to be there a little after check in opened at 2. I arrived at the parking lot and that’s when the second curveball of the weekend hit. The parking lot was about 1K from the staging area part of which was downhill and then up. There was a quad bringing some items up but they had to overly heavy or awkwardly shape for them to bring it which applied to nothing I had brought, so that meant I had to make 3 trips to my car and back (5K total up and down each way). This meant I made burnt up more energy prerace then I had planned and started into my food a little earlier than intended. Now the good side to being there on the early side was getting a decent spot to step up my tent. I was right next to a walk way which meant no neighbor on one side plus I was not far from the food prep area which was a real plus.

After getting my tent setup I tried to have a power nap but that’s easier said than done on a hot day, in a tent that doesn’t breathe well. I ate what I could to get my energy back up as I had already burned the same number of calories I do in a normal day by 5PM while also trying not to deplete my food. I was so hungry that I changed my mind on eating the meal X Warrior was providing racers prerace.  Originally, I was not going to touch it, coming off food poisoning that week and wondering how they would prepare such large amounts of foods, but after seeing it was prepacked individual containers and out of sheer hunger I had to throw my questions out the window and just dig in.

Finally feeling ok again, it became a waiting game. We had a quick rules brief and then had to sit around and wait for the 30 minute prestart warning siren. I tried to use the time to hydrate as much as I could while also trying to cut way down on movement so I would have some energy left.

8:41PM the siren went everybody myself included disappeared into their tents to get ready or lined up for the port-a-potties. For the first lap I wanted to pack as light as possible as I want to get as much distance covered in the 45-minute obstacle free time as I could, especially seeing that the grip-based obstacles I routinely fail at dominate the back part of the loop so the less times I could try those the better. Racers were allowed to go headlamp free during this time as well (the only time we could until after sunrise) so I went without the headlamp, race vest or any nutrition for the start just wanting to run fast for as long as I could. With nothing left to do I made my way over the start line ready to run.

Off the start the pace for the masses wasn’t as fast as I expected. Probably a combination of pacing and the sheer number of racers. The trails of the start were an interesting mix of running through tall grass, borderline bog, and dirt trails. Now while the course was relatively flat there were probably 4 short but very steep hills (two of which need ropes for help), this did bottleneck the route a small amount but in the time crunch to start felt much worse. After covering about two-thirds of the loop in 40 or so minutes I knew I wasn’t going to make the full loop in 45 so then my goal changed to get past as many obstacles as I could. I stepped on the gas and pushed my pace faster than usual, then curveball number 3 hit. As I came up to each obstacle now expecting to have to attempt it the volunteers kept saying to just keep going, now I wasn’t going to stop and ask questions then end up having to do the obstacles. I just assumed their watch was different than mine or something else was happening elsewhere on the course that was a higher priority, so I continued at my faster pace. Turns out they gave us an hour of obstacle free time which meant I was able to finish up my first lap before having to try any obstacles.

After finishing that lap, I ran to my tent grabbed my headlamp and arm beacon than went right back on course. For my second lap I knew the obstacles would be open as I could see other racers taking on the obstacles closest to the tent village. The first part of each lap was mostly running before you really started encountering obstacles about a third of the way on the loop. On this lap though the hardest obstacle was the X Funnel which was an incline wall facing towards you climb up, then you slide down the backside then had to climb up the same style facing away from you but with incredibly small holds that the toe of my shoes wouldn’t even fit in. After what felt like 15 minutes (was probably less) of struggling I even asked the volunteers to mark my wrist band as a fail, which was not an option of this particular obstacle. I eventually climb up and out using the support beam in the middle, which I probably wasn’t supposed to do, only to have to do it all over again at the second funnel 10 feet away.

After that is when the mental challenge of this event sank in. Feeling frustrated after the funnels I then went into a section with a lot of grip-based obstacles which of course my weakness and just to make it harder it started pouring rain. Now while the rain only lasted 10-15 minutes and helped cool you down it did feel like a garden hose was right on you even in the trees, I even looked up into the trees to see if some how it wasn’t mother nature providing the waterworks but an elaborate man-made rain system. At this point I changed my plan for lap breaks, said to myself just get through what was left on the loop instead of going straight back around and then head in for rest and food. Finishing off the lap I went into the penalty section for failing the high and low rigs, axe throw and the peg boards (which was a Z Wall you moved pegs for the handholds) which meant I did the max penalty loop distance for 4 fails and up. After that I went straight back to the tent where I couldn’t get into my sleeping bag fast enough to warmup, dry off and get some rest.

In part 2 of the race review I’ll delve into what happens the rest of the race.

I am a proud father & husband. A former semi-pro skier, turned rugby 7’s player, I’ve now worked to become a OCR racer. Does anyone read this part? Drop a comment if you do.